Coldwater, MI, population 12,250[4], is located on the eastern shore of North Lake & South Lake in Branch County.  The Sauk River, a tributary of the city’s namesake, the Coldwater River, flows through the lower half of the city from the southeast. In 2019, Coldwater earned distinction as a Tree City USA from the National Arbor Day Foundation for the fourteenth consecutive year. 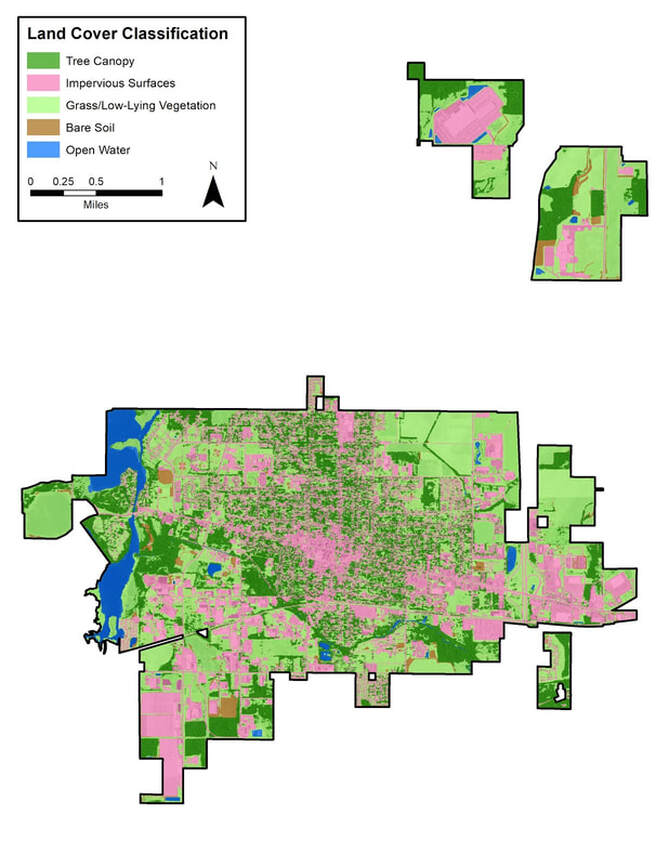 Figure 1C. Coldwater land cover classification.
To view this and other maps in an interactive format visit the Story Map

The level of tree canopy cover present in any given locality often correlates with how the land is utilized. Figure 2C illustrates a land use map of Coldwater, and Table 2C presents the various categories of land use as they relate to the five classifications of land cover detailed in the previous section.
​
In most communities, commercial and institutional areas tend to have lower levels of tree canopy and higher levels of impervious surfaces than residential or agriculture/forested districts. This pattern holds true for the City of Coldwater; the percentage of canopy cover in commercial and institutional areas is 9% and 8%, respectively, while the percentage of impervious surfaces for the same areas is 48% and 60%, respectively. Residential areas have the highest level of tree canopy cover at 33%, and agricultural/forested land comes in at a close second with 30% canopy coverage.

Opportunities to expand canopy coverage should be pursued in all land use areas, though suitable planting locations may be limited, particularly within commercial, institutional, and open space/recreational areas. High levels of impervious surface restrict available locations within commercial and institutional locations. Open space/recreational areas are predominantly grass/low-lying vegetation (55%), which may seem ideal for planting, but likely represent maintained parks and playgrounds, sports fields, community gardens, or other areas intentionally cultivated or designed to have lower tree canopy levels. Residential areas present effective opportunities for new plantings; engaged residents are receptive to planting efforts that produce results they can see and enjoy on a daily basis. 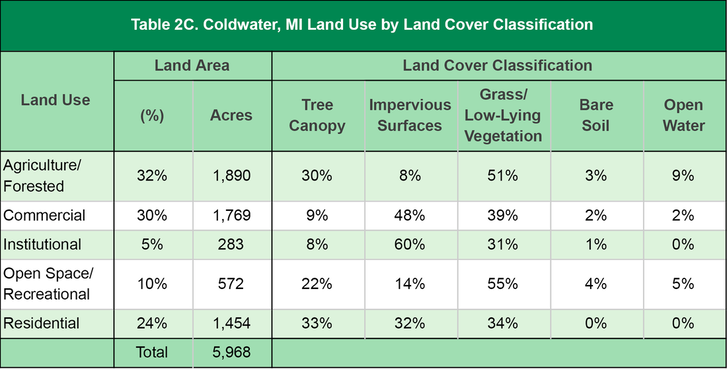 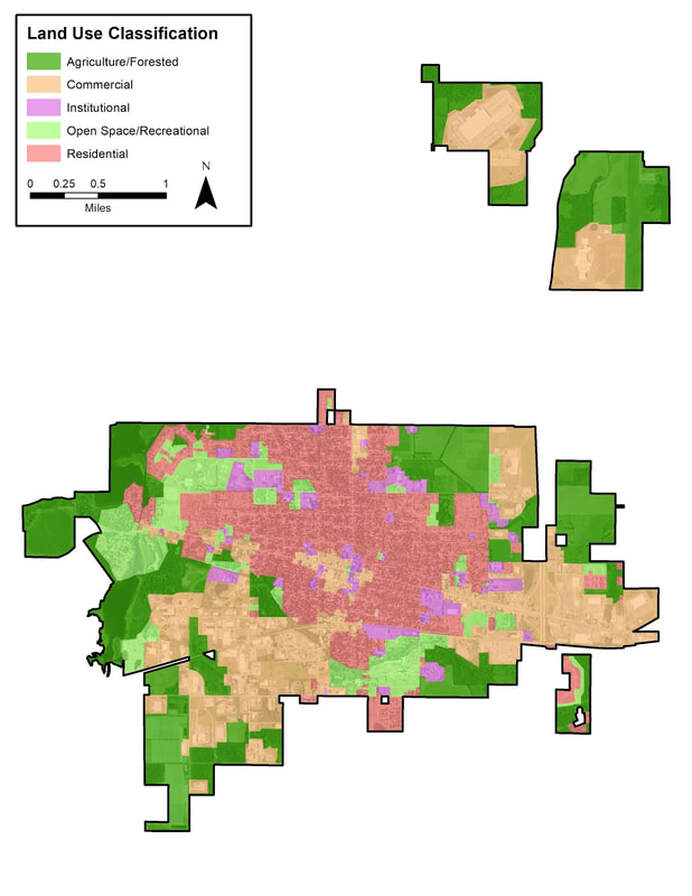 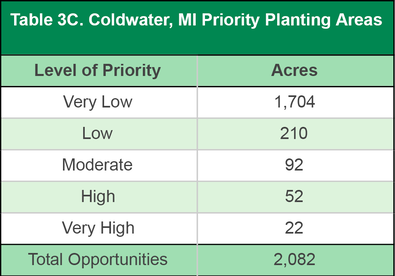 Once potential planting areas were identified, locations were assigned a priority ranking through an assessment of a variety of environmental features, including a given site’s proximity to hardscape and existing tree canopy, soil permeability, slope, soil erosion, floodplain proximity, and the urban heat island index. More information on the inputs for the planting analysis can be found within the Project Overview.

The map of priority planting levels (Figure 3C) can be used to identify potential locations where new plantings may deliver the most impact in terms of ecosystem and community benefits. For example, Coldwater can use this map as a guide when deciding where future trees should be planted to have the greatest effect on lessening stormwater runoff. Of the city’s 2,082 plantable acres, 166 acres (8%) are assigned a planting priority of Moderate or above (Table 3C). If only these areas are planted, Coldwater’s canopy coverage would grow from 1,355 acres to 1,521 acres, increasing total canopy coverage to 25.5%.
​
Residential areas in the northwest of the city, south Seeley Street and west of Michigan Ave, are priority areas for new plantings in order to improve overall canopy coverage and mitigate harmful effects of stormwater runoff. 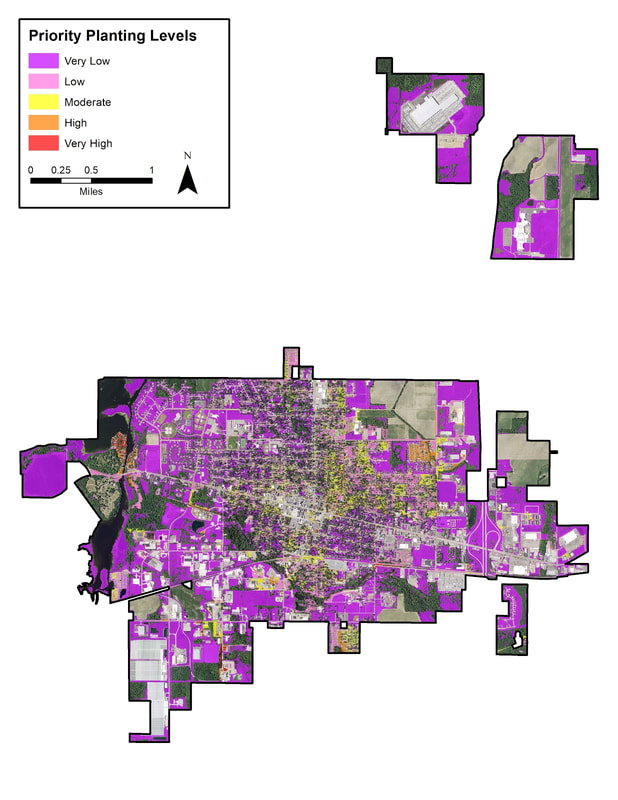 Analysis of tree canopy percentage by census block can be used as a supplemental tool in determining which neighborhoods are in most need of new plantings (Figure 4C). For Coldwater, the map reveals several census blocks in the city-center which contain less than 10% canopy coverage. Other canopy deficient areas that stand out on the census block map are among the commercial land use areas in the east around the I-69 junction and in the southwest corner of the city. 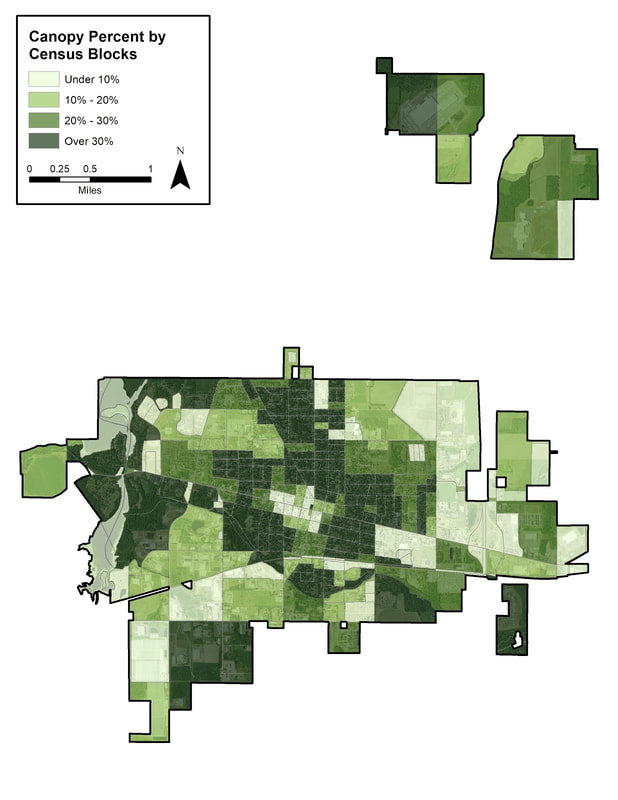 Assessment of the canopy coverage percentage along city right-of-way (ROW) can help provide insight into a segment of the community forest that a municipality can most directly affect: its public streets. Canopy ROW analysis allows planners to identify specific streets within the community with minimal canopy coverage and thus target critical areas on which to focus new planting efforts. Oftentimes, the lowest percentage of ROW canopy is found along state routes and streets within commercial areas. In Coldwater, the analysis confirms this trend to hold true.

​Large portions of Chicago Street (U.S. Route 12), the main thoroughfare, are found with less than 10% canopy cover (Figure 5C). Additionally, a significant portion of the ROWs on the eastern edge of town, by the I-69 Junction, and the southwestern corner, around Garfield Rd, exhibit less than 10% canopy cover. These areas also correspond to high levels of impervious surface. As such, these areas are good targets for city street tree planting. It is important that planting initiatives work to earn buy-in from the area businesses who may have concerns, such as the potential for tree canopy to reduce visibility of their business signage or for tree roots to damage sidewalks and other hardscape.  Many concerns can be alleviated by ensuring that the correct trees, both in terms of species and size, are chosen to suit the planting spaces along the ROW. Remember the mantra “right tree, right place.” 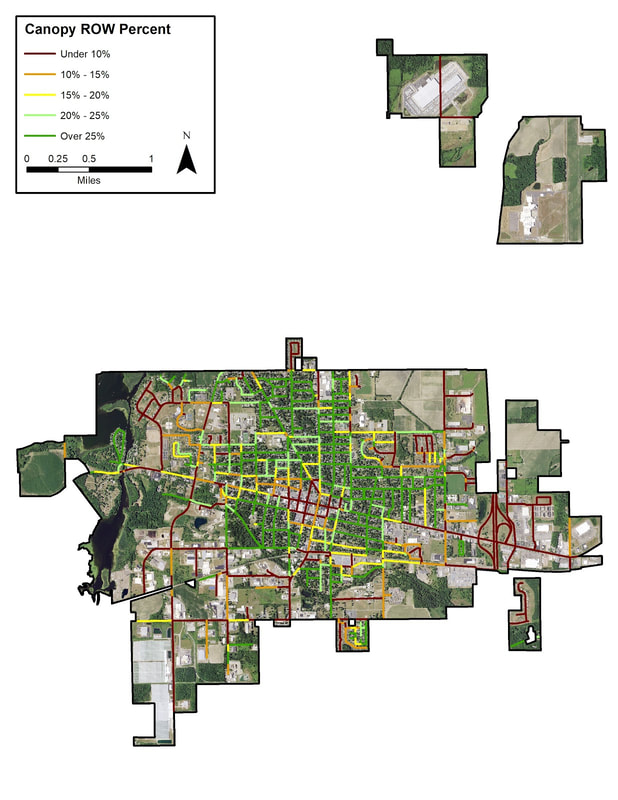 Community forests are important components of the ecosystem and provide quantifiable benefits.  In total, Coldwater realizes an annual benefit of $733,633 from its trees. These annual benefits include $2,335 in reduction of air pollution, carbon sequestration equivalent to $319,685, and stormwater reduction valued at $411,613. Additionally, the city’s trees are estimated to have stored 173,225 tons of carbon over the course of their lifetime for an estimated total value of $8,028,500. 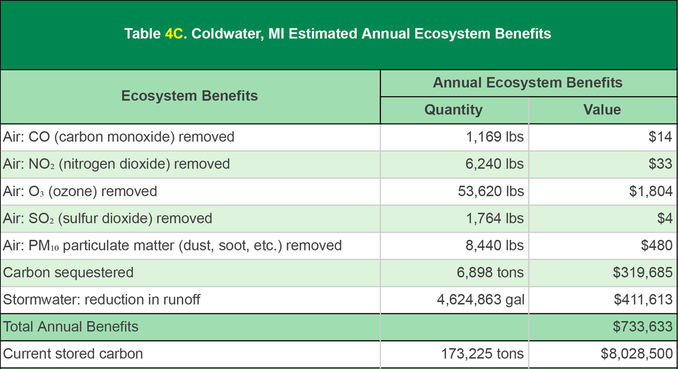 ​Coldwater received a custom assessment analyzing the city’s canopy change from 2009 to 2018. Over the past decade, Coldwater’s tree canopy expanded by 79 acres and improved from 21.4% to 22.7% overall canopy coverage (Table 5C).

​Figure 6C presents a map of Coldwater by Census Block and displays the percent canopy change for each census block over the course of the period of study, 2009-2018. The map is useful for pinpointing areas of canopy change to help identify trends, potential trouble areas and positive examples which help inform maintenance and policy decisions related to the city’s community forest.  For example, the southwestern tip of the city lost significant canopy; further investigation reveals that an area previously utilized as agricultural/forested land was supplanted by commercial land use. 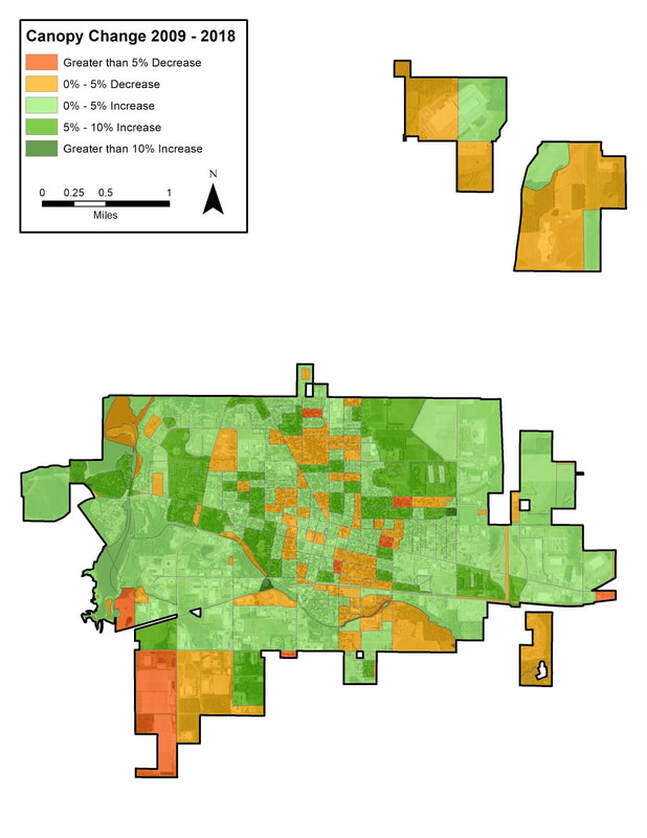 Stormwater runoff is at the forefront of Coldwater’s concerns, as the city abuts North Lake and South Lake on the west, the Sauk River flows through the southern half of the city, and Cold Creek flows just to the north. The custom analysis performed for Coldwater of the city’s catchment basins (areas that collect water before drainage into surrounding bodies of water) can pinpoint where water flows throughout the city (Figure 7C). The map is shaded by percent contribution to runoff. The areas with the highest percent runoff are shaded the darkest green

Importantly, this analysis shows the areas where the most water will flow, and thus the areas most susceptible to the effects of erosion and sediment loss. As trees intercept large amounts of stormwater, thereby reducing runoff and mitigating pollutants, changes in tree canopy along the catchment areas have substantial impacts on water quality. Expanding tree canopy along the catchment areas may provide simple opportunities to meaningfully influence water quality. Planting trees along and near the outlets of the catchment basins can help decrease erosion and slow the flow of water as the roots absorb water heading towards the bay; areas with the highest percent runoff should be targeted for future planting efforts. 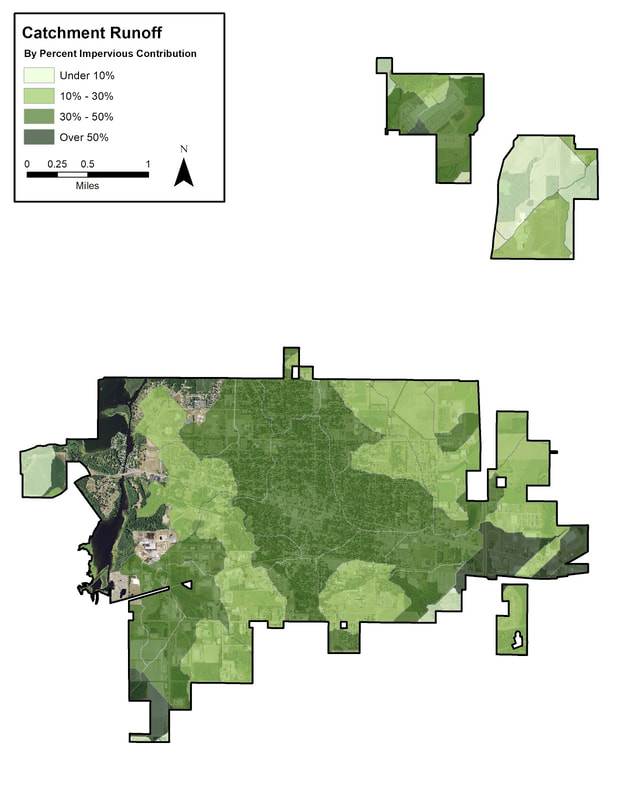