Town of Syracuse, IN
Assessment Results

​The Town of Syracuse, population 2,888[4], is located on the western shore of Lake Syracuse in Turkey Creek Township, Kosciusko County, Indiana. Syracuse is known for its tree-lined streets and is proud to earn distinction by the National Arbor Day Foundation as a Tree City USA for the nineteenth consecutive year. The town’s location by the lakes creates a natural environment for recreation, and the city's commitment to enhancing the community's quality of life has produced a system of beautifully landscaped parks, a public boat pier, groomed beaches and a host of progressive recreational programs and activities. 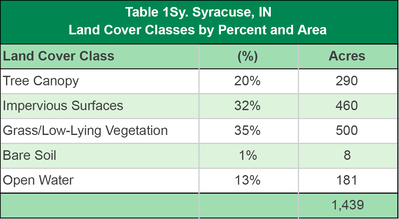 ​The tree canopy of Syracuse is estimated to cover 290 acres and account for 20% of the town’s total land cover (Table 1Sy). Approximately 36% of the town’s land cover consists of grass/low-lying vegetation and bare soil, while impervious surfaces such as buildings, roads, and other types of pavement cover 32% of Syracuse’ total land area. Open water accounts for a significantly larger proportion of total land cover in Syracuse (13%) than the other five grant recipient communities in the SJRW.

​Figure 1Sy presents a map of Syracuse with an overlay of the five classifications of land cover. Except for the city-center, which exhibits high concentrations of impervious surface, tree canopy coverage appears dispersed throughout the town. High concentration of canopy coverage is found on the western edge of the town, along Kern Road near the high school, and on the northern town limits (east of 13 and south of E 1400 N). Improving canopy coverage near areas with large amounts of impervious surface will help mitigate stormwater runoff, a critical need for communities in such close proximity to large bodies of water. 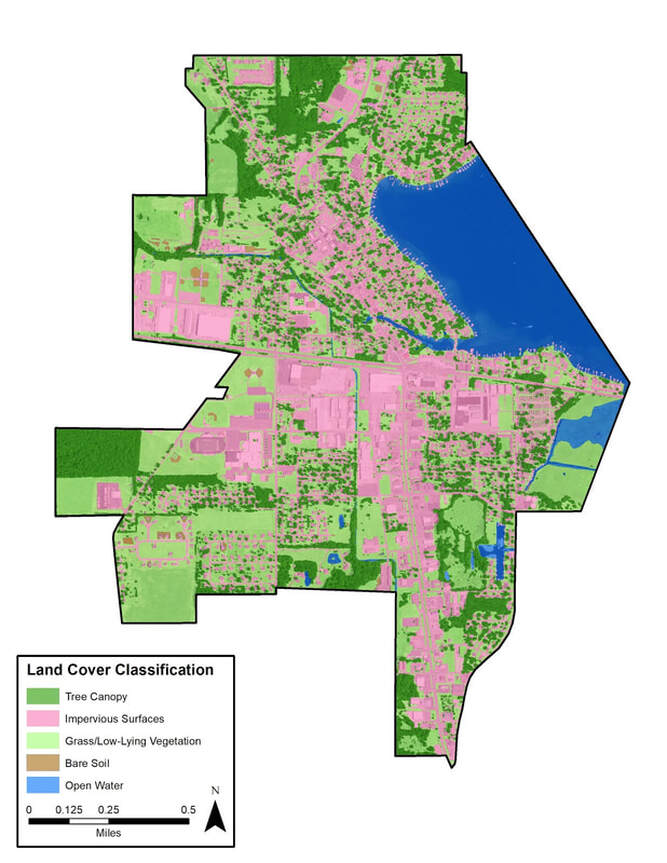 Figure 1Sy. Syracuse land cover classification.
To view this and other maps in an interactive format visit the Story Map

Tree Canopy Related to Land USe

The level of tree canopy coverage within a community often correlates with how the land is utilized. Table 2Sy presents the various categories of land use as they relate to the five classifications of land cover detailed in the previous section, and Figure 2Sy illustrates a land use map of Syracuse.
​
In most communities, commercial and institutional areas tend to have lower levels of tree canopy and higher levels of impervious surfaces than residential or agriculture/forested districts. This pattern holds true for the Town of Syracuse; the percentage of canopy cover in commercial and institutional areas is 7% and 5%, respectively, while the percentage of impervious surfaces for the same areas is 67% and 62%, respectively.  Agricultural/forested lands have the highest level of tree canopy cover at 56%, and the town’s residential areas are 28% covered with tree canopy.

Opportunities to increase canopy cover in commercial, institutional, and open space/recreational areas through new plantings should be pursued, though suitable planting locations may be limited. High levels of impervious surface restrict available locations within commercial and institutional locations. Open space/recreational areas predominantly consist of open water (49%) and grass/low-lying vegetation (34%). While grassy areas and bare soil (1%) may seem ideal for planting, these types of land cover, when present within open space/recreational areas, likely represent maintained parks and playgrounds, sports fields, community gardens, or other areas intentionally cultivated or designed to have lower tree canopy levels. Residential areas (40% covered with grass/low-lying vegetation within Syracuse) generally present effective opportunities for new plantings; engaged residents are receptive to planting efforts that produce results they can see and enjoy on a daily basis.
​
Careful review of all areas is key to identify suitable planting locations and increase overall tree canopy. Comparison of the land use map (Figure 2Sy) and the land cover map (Figure 1Sy) visually demonstrates the correlation between high levels of impervious surface and commercial and institutional land use areas. 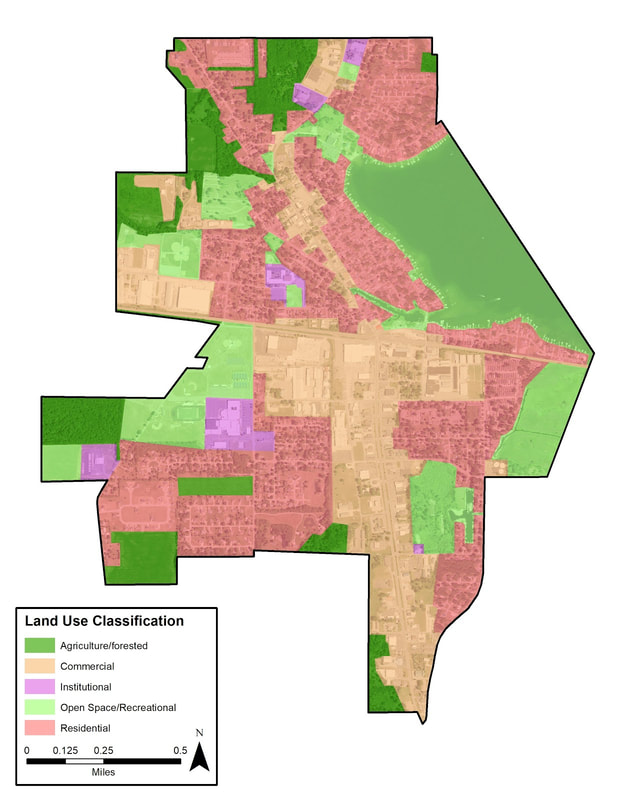 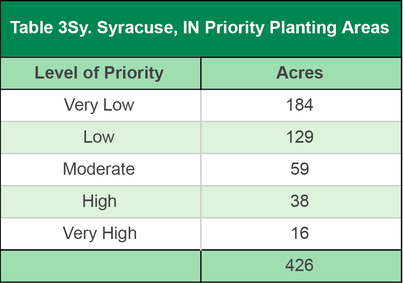 The priority planting analysis dug deeper into Syracuse’s land cover data in order to identify and prioritize potential areas for new tree plantings. Only grassy areas, open space, and bare soil were included in the analysis. Non-feasible planting areas, such as agricultural fields, recreational fields, major utility corridors, etc. were excluded from consideration. Once potential planting areas were identified, locations were assigned a priority ranking through an assessment of a variety of environmental features, including a given site’s proximity to hardscape and existing tree canopy, soil permeability, slope, soil erosion, floodplain proximity, and the urban heat island index.

The map of prioritized planting areas (Figure 3Sy) can be used to identify potential locations where new plantings may deliver the most impact in terms of ecosystem and community benefits, such as deciding where future trees should be planted to have the greatest effect on lessening stormwater runoff. Of the town’s 426 plantable acres, 113 acres (26%) are assigned a planting priority of Moderate or above (Table 3Sy). If Syracuse focused planting efforts on maximizing the potential of these areas, then the town’s canopy would grow from the current number of 290 acres to 403 canopy acres, increasing total canopy coverage to 28%, a 40% increase from current levels. 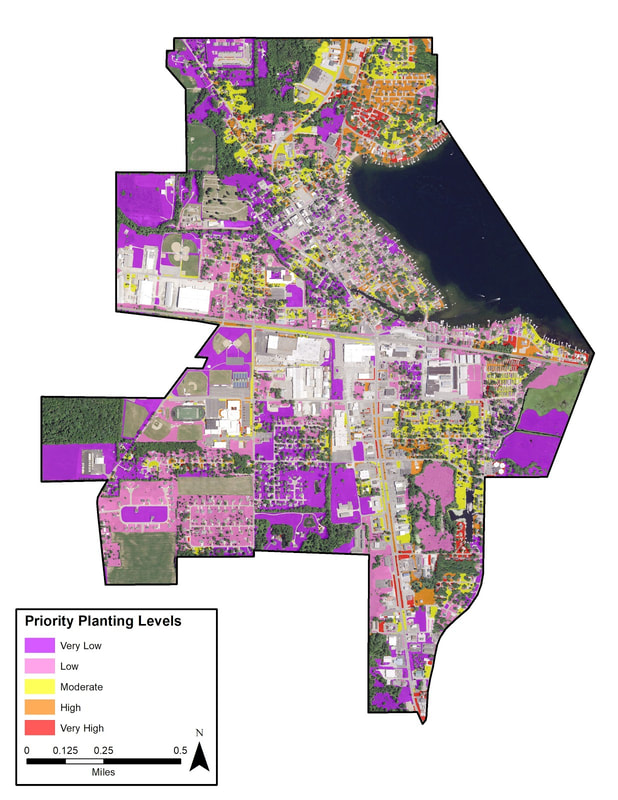 Analysis of tree canopy percentage by parcel can be particularly useful as a tool in determining which lots are most in need of canopy coverage (Figure 4Sy). Parcel-level information includes data on land ownership, which can be helpful when strategically planning new planting initiatives. City planners can use this information to identify the owners of those parcels and potentially work together to reestablish canopy. For example, the residential areas to the west and north of Syracuse Lake have clusters of parcels with less than 10% coverage. These parcels can be cross-referenced with the planting priority area layer to identify parcels containing areas of higher planting priority, and the owners of the parcels could potentially be engaged to discuss the establishment of new tree canopy within their parcel bounds. 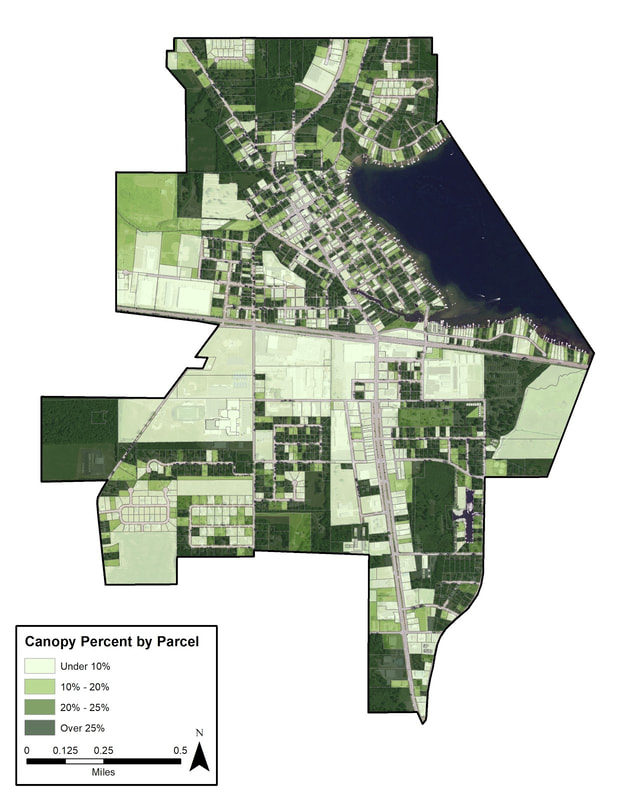 Assessment of the canopy coverage percentage along town right-of-way (ROW) can help provide insight into a segment of the community forest that a municipality can most directly affect: its public streets. Canopy ROW analysis allows planners to identify specific streets within the community with minimal canopy coverage and thus target critical areas on which to focus new planting efforts. Oftentimes, the lowest percentage of ROW canopy is found along state routes and streets within commercial areas.

Figure 5Sy demonstrates that this trend holds true in Syracuse, where the right-of-ways with the lowest percentage of canopy coverage are observed along both North and South Huntington Street (State Route 13). These roads are good targets for town street ROW tree planting efforts. It is important that planting initiatives work to earn buy-in from the area businesses who may have concerns, such as the potential for tree canopy to reduce visibility of their business signage or for tree roots to damage sidewalks and other types of hardscape. Many concerns can be alleviated by ensuring that the correct trees, both in terms of species and size, are chosen to suit the planting spaces along the ROW. Remember the mantra “right tree, right place.” 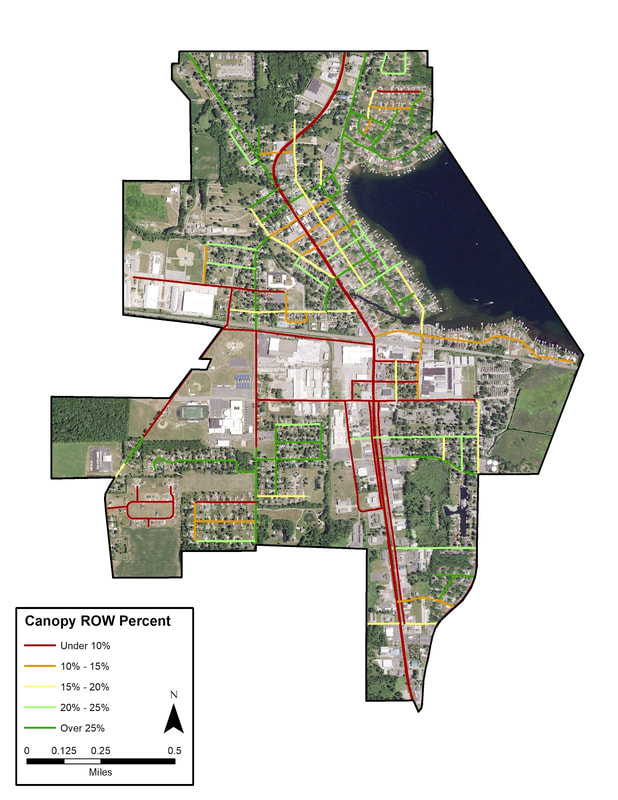 Community forests are important components of the ecosystem and provide quantifiable benefits.  In total, Syracuse realizes an annual benefit of $278,430 from its trees (Table 4Sy). These annual benefits include $921 in reduction of air pollution, carbon sequestration equivalent to $67,050, and stormwater reduction valued at $210,459. Additionally, the town’s trees are estimated to have stored 36,332 tons of carbon over the course of their lifetime for an estimated total value of $1,962,319. 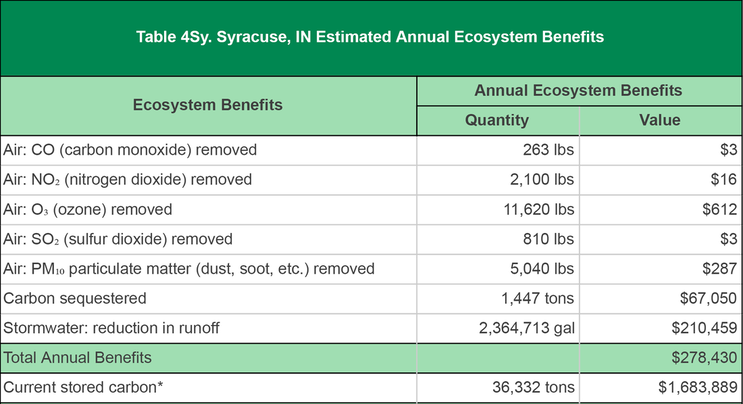 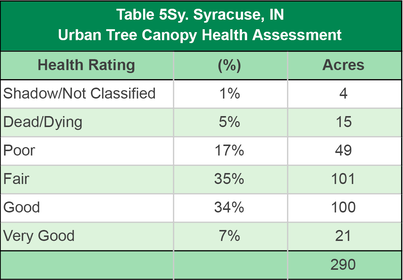 An index of tree health can be created through analysis of the spectral characteristics of the tree canopy layer utilizing the Normalized Difference Vegetation Index (NDVI). The NDVI is a simple graphical indicator that can be used in assessing whether or not the target being observed contains live green vegetation. The NDVI is useful in identifying locations of vegetation in poor or declining health.
​
Syracuse’s 290 acres of tree canopy were analyzed using the NDVI in conjunction with remote sensing methods in order to create a visual tree health index for assessing the condition of the town’s urban tree canopy. Based on the analysis, approximately 77% of the town’s canopy acres are rated in fair or better health (Table 5Sy), while 22% were determined to be in poor or worse condition. Approximately 1% of the town’s canopy could not be classified due to shadows or other obstacles preventing accurate analysis.

These results can be useful in targeting maintenance, preservation, restoration, or removal efforts to improve deficient areas of the urban canopy. Figure 6Sy, a map of Syracuse’s tree health index, provides a visual indicator of some of these areas. The map reveals the residential area along the shore of Syracuse Lake as an area requiring further investigation; The majority of canopy in this area is Fair, with several pockets of Poor and Dead/Dying vegetation. 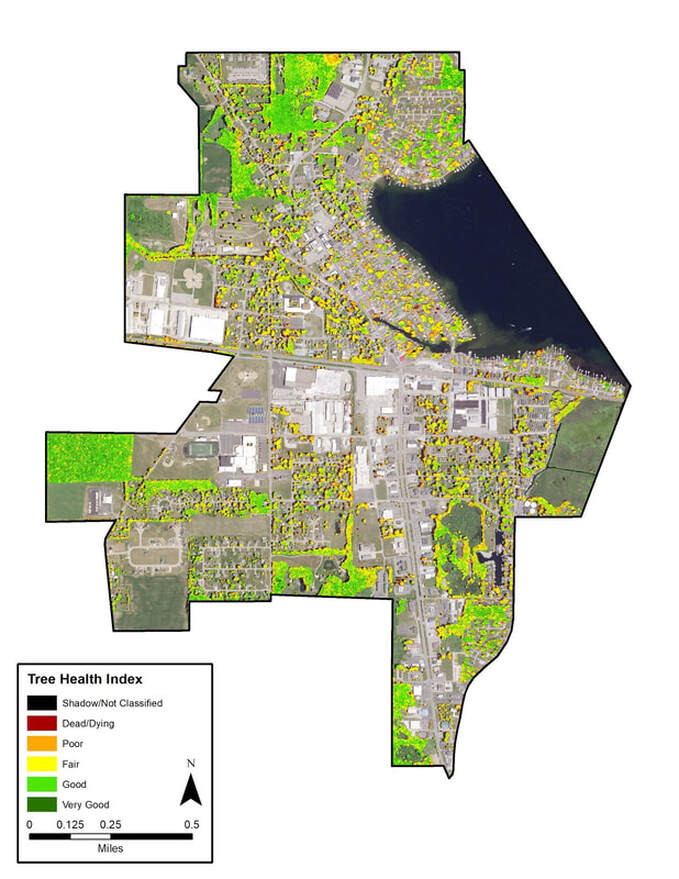 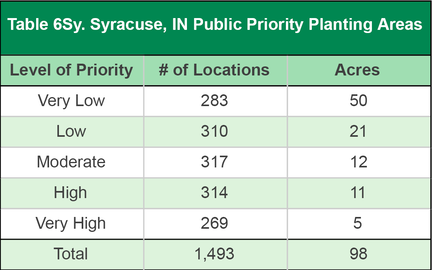 ​Syracuse took their priority planting analysis a step further by independently analyzing public and private lands. The map of prioritized planting areas in Angola’s public space (Figure 6Sy) can be used to identify and prioritize locations for city-funded planting initiatives.

Prioritization of the town’s public spaces will allow the city to maximize its return on planting investments by placing new trees in areas that will deliver the greatest impacts in terms of ecosystem and community benefits.  Of the town’s 98 plantable acres in public spaces, 27 acres (28%) are assigned a planting priority of Moderate or above (Table 6Sy). If Syracuse focused planting efforts on maximizing the potential of these areas, then the town’s canopy would grow from the current number of 290 acres to 318 canopy acres, increasing total canopy coverage to just over 21%. 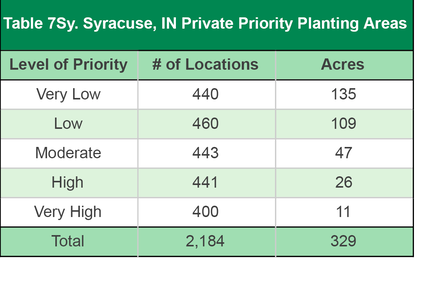 ​​The map of prioritized planting areas in private space (Figure 8Sy) can be used to identify potential locations for privately funded and public-private partnerships to target for maximized return on their community planting investment. Of the town’s 329 plantable acres within private spaces, 85 acres (26%) are assigned a planting priority of Moderate or above (Table 7Sy). If Syracuse focused planting efforts on maximizing the potential of these areas, then the town’s canopy would grow from the current number of 290 acres to 375 canopy acres, increasing total canopy coverage to 25%, which represents a 25% increase from the current level of 20% coverage.
The analysis demonstrates that Syracuse cannot rely solely on public space planting efforts in order to significantly improve canopy coverage and mitigate the hazard of stormwater runoff; private spaces represent greater quantities of opportunity. At the same time, the analysis again reveals South Huntington Street as a priority area to focus public planting efforts. The map reveals the neighborhood north of the lake to have numerous high priority planting locations; city planners could improve canopy coverage in these areas with targeted tree planting initiatives that engage and encourage citizen participation. ​ 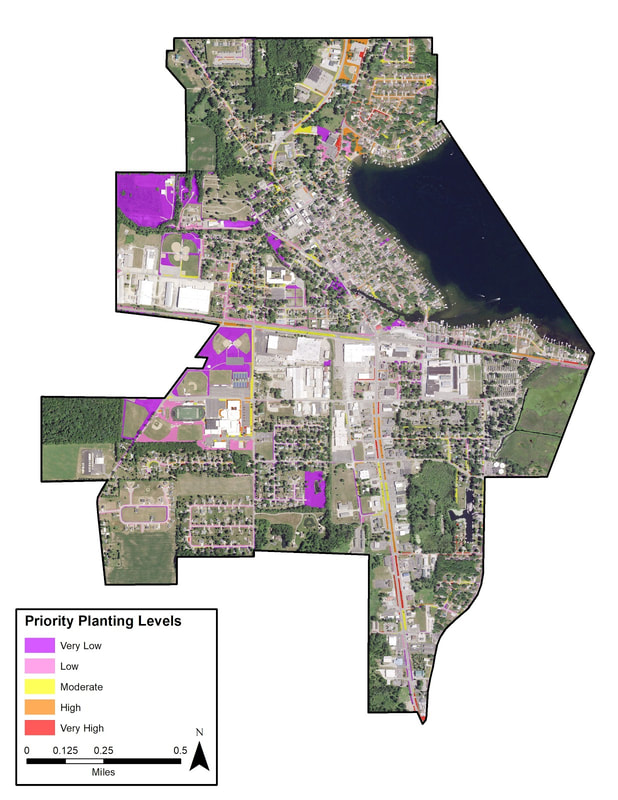 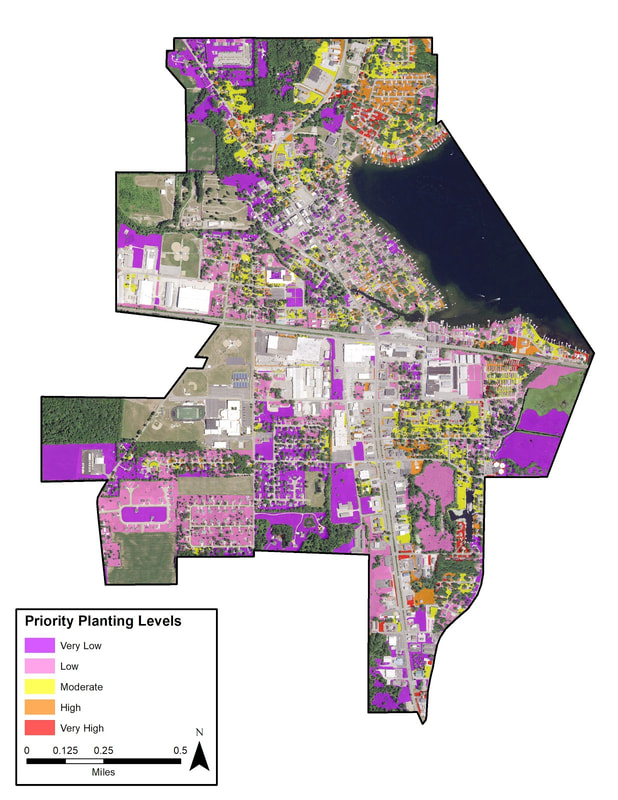